I thought that writing the history of the old RSL Hall on the corner of Jaques and Rodgers Streets, would be an easy blog. Well, driven by a deadline, I sit down to write and I am still baffled by its secrets. For example, is the facade, which suits it so well, original? Then why is it metres longer than the building? What’s with the embedded archway inside the building behind the facade? Was there once a large arched glazed entrance? When was the western extension of cement blocks built? When was the land, lot 20 section 12, subdivided? And when was that little house to the north of the hall built? It has me beat.

I do know the building was erected as a butcher’s shop in 1923, by Cecil Robert Kerney, Marie Trounson’s uncle Bob. And a fine job he appeared to do – double brick, iron roof, catenary arches and tiles. Tiles were a feature (using a Sydney tiler no less). Tiles of ferns on the inside of the shop and tiles depicting animal heads, “above an arched doorway” according to Fleming[i]. Ah! So yes, the facade is not original.

In its first year there were no takers for another butcher’s shop. However, accommodation in the town was in such demand, that as soon as he built it, Kerney had four men sleeping in the shop and 47 boarders in other premises and charged them 32/6 a week. Eric Hanson opened the doors of the butchers shop for the first time in August 1924 and assured customers he sold the primest beef and mutton. He was followed in 1926 by Sid Lowe who only lasted a few months; and then by Shaw & Sons who ran it for two years. In 1928 they left it under the management of Tom Chaston who had it for ten years.

It’s unclear who actually owned the building in December 1930 when the Butcher’s Shop and Residence were offered in a mortgagee’s sale, it being of course the beginning of the Depression. The building was still on its quarter acre block but now had a dwelling of “fibro cement with iron roof”. At another mortgagee sale in 1934, the property was described as “a fine brick and concrete shop”. That raises a conundrum. Fibro cement is sheeting, so quite different from the concrete blocks which are still there. It suggests there might have been an earlier accommodation, later demolished.

The Depression had a devastating impact on Kandos property. At the second mortgagee sale seven “fine” Kandos properties sold for a total of £135 (one property worth an estimated £800).  At £12 the butchers shop was a steal for Kandos RSSILA (Returned Soldiers and Sailors Imperial League of Australia). They had formed their sub-branch two years earlier but obviously had no funds to revamp the building, so the butchers shop continued till 1938.

And so we come to the old RSL Hall. You could hear the enthusiastic revelry blocks away, when the  new club premises opened on Thursday 22 September 1938 with a concert and dance. Bill Taylor on piano and Les Baistow on violin accompanied an array of performers keen to display their talents. The Scout Troop presented a short play titled “St George and the Dragon”. The audience erupted into a medley of community singing. And dancers tripped nimbly on the light fantastic toe and commented favourably on the newly laid floor and “other features of the hall”. Sadly we don’t know what those were, but volunteers had worked throughout the year to get the hall fit for purpose.

The RSL began in Australia in 1916, flourished in small towns like Kandos, and grew through the century to become one of the most influential institutions in Australia. Emerging from a concern for ex-servicemen affected by war, it represented their interests, memorialised them and supported them, emotionally and practically. It’s not surprising that every monthly meeting at Kandos sub-branch began with two minutes silence. Nor that, from 1943, when the RSL installed a pole, the Union Jack flew at half-mast over the building whenever a local soldier or ex-serviceman died. Their funerals too were arranged or supported by the RSL. Meetings in The Hall focussed on remembrance (Anzac and Armistice Days); advocacy (War Pensions and Veterans Home); and fund-raising (for causes as disparate as local floods, Legacy, “Food for Britain” and Westminster Abbey Restoration).

A women’s committee was formed in 1941 and I suspect the men breathed a sigh of relief. The committee provided supper for diggers’ events, such as smokos and revels, and arranged a lot of the fund-raising. Two notable ones were the  Hayseeds Fancy Dress Ball at Truswell’s and a street carnival with a dance in the hall to follow. The women pushed for a kitchen (costing about £25) made homely refurbishments to the hall and purchased cutlery and crockery. They were also the ones to organise an entrant in the Miss Australia Quest run in 1952 by Northcott Neurological (a diagnostic centre for nervous disorders in veterans). Local teacher Mary Phelan and co raised £818, the RSL got back £409 and donated twenty guineas to Northcott. Don’t ask me how that worked!

Post-war the hall became a popular venue for meetings and social events, for members and non-members. The granting of a liquor license in 1948 probably made the difference. The RSL Recreation Club was formed in 1950 for financial members. It opened two nights a week, ran a monthly social, and formed sporting groups including table tennis. It was around that time that concerns were first raised that RSL recreation clubs would supersede sub-branches. Which, arguably, they eventually did.

The hall was also hired out to other community groups for meetings, fund-raising and social functions. In the 1950s it pulsed with the rhythm of music from the new radiogram and records; or from the piano and new set of drums. In 1952 Miss Norma Guthrie celebrated her 21st birthday with seventy friends, who enjoyed supper, dancing and games. Every pay Saturday night there were euchre nights and in 1953 the first Anzac Day dinner was held in the hall.

Hall improvements headed the agenda of many meetings through the forties and into the fifties. But, as in most small communities, there was little funding and few volunteers. Things looked more hopeful in 1947 when a sub-committee consisting of Bill Junge, Hughie Hutton and Bill Blain was formed to arrange improvements. In 1950 plans were discussed to improve the approaches to the hall “to make the external appearances measure up to the vastly improved appearance and conveniences of the inside”. I suspect this was when the facade was built. In 1952 water was laid to the club. In 1953 they decided to extend the building which included a cellar and cool room. From then on there were numerous working bees.

And so they had another opening. On the 17th July 1954 ninety people sat down to an excellent poultry supper prepared by the women’s auxiliary. Bill Junge and Mrs Hodge opened the extension, special musical honours went to Messrs Kennedy, Thomason and Bonventi (whom I presume did most of the work). A highlight of the evening was the men’s “glow worm ballet”.

After the RSL built a new recreation club and bowling green on an adjacent site, the old hall continued as a venue for dances, weddings and children’s parties and films. A youth club operated in the late seventies and early eighties, including a boxing club run by Jim Large. That building, in that era, made memories for many of you today.

When June and Brian Keech bought the hall in 2009 it wasn’t quite the steal of 1934, but still a good buy. And it wasn’t just a job of taking blue tack and thumbtacks from the ceiling. Most people would be put off by the metre of water in the cellar and the general neglect and deterioration of the building, but this extraordinary renovating pair turned it into a comfortable home and thriving garden in a couple of years. Some of you, along with Costa, saw it at the Kandos Gardens Fair. I think Kevin McLeod would be impressed.

[i] Bruce Fleming History of Kandos 1984 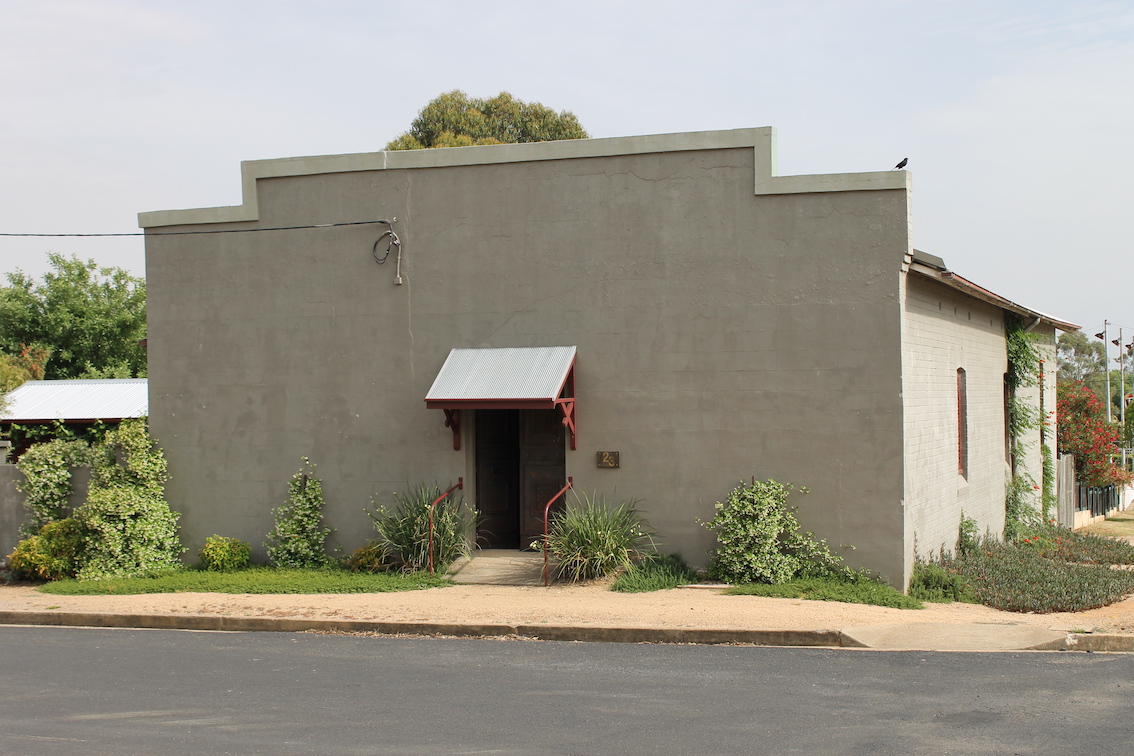 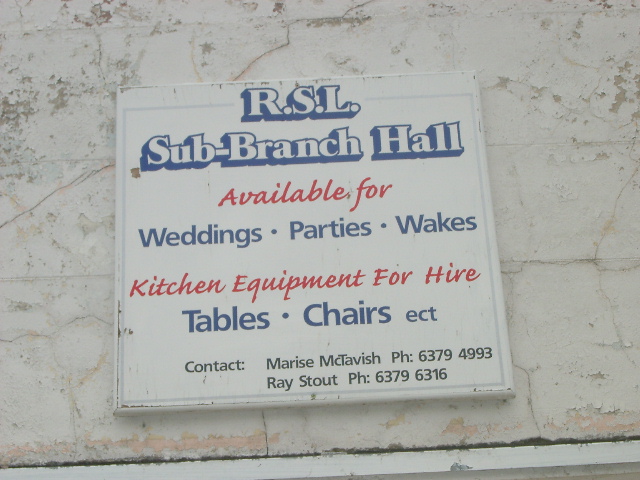 Four things about me. I like reading, writing, researching and living in the country. In particular I like living at Kandos, where we have been for more than a decade. I have deep roots in this part of the country. My mother spent her early life in Kandos. My father was born at Rylstone. My grandparents were pioneers of Kandos and Rylstone. And I was born at Lue - and went to school in Mudgee. The history of this area excites me and I would like to share it with you. Currently I am writing monthly blogs posted on the 1st of each month. If you "Follow" and give your email address the blogs will be automatically sent to you. View all posts by Kandos History

14 thoughts on “A Building Inquiry”