“I remember nothing of my parents until about three or four years old. At this stage I took to roaming about. Very often, when not noticed, I would go off to the creek. When five years old I used to go with my brother after rabbits. We were both young and did plenty of mischief. This pleasure cannot last always as I found out. At the age of six years I had to go to school…”

Lottie might well have been in that photo of Pyangle School. I don’t know when it was taken. Perhaps my grandmother Minnie Batten is somewhere there or one of her siblings. If you look closely, it’s a carefully composed scattering of children. The boys on one side in their hats and jackets; the girls on the other side in their pinafores and hats; and those two little mites in the front, she, sitting sedately with her legs folded underneath, he, in a casual boy-style. The teacher in the entrance might be Miss Eames, who welcomed the children into their new school building in 1885.

You have to admit it’s an unusual building. And so it was – a Beehive school, designed by William Kemp, Chief Architect for the NSW Department of Public Instruction. He introduced a new style of bush school that avoided the Gothic, had an enclosed verandah, semi-circular galvanised iron roof and was built with local materials (in the case of Pyangle, timber and stone). I don’t know how many beehive buildings are still around. I’ve discovered two on the internet.

The school was on Pyangle Road. If you have driven along Pyangle Road you would have noticed an old chimney which I always thought was its remains, but no, the school was a little further along the road. A Parish map of Louee shows a two-acre lot (280) in a corner of lot 173, originally belonging to D J Smede. The school closed in 1916 and in 1925 W J Clarke of “Baroona” (even further along the road) purchased and removed the building for £10. He had to pay a deposit of £1 to make sure he left the site clean, level and tidy.

Twenty years before Lottie was born, the NSW Public Instruction Act of 1880 made education compulsory for all children six to fourteen. They had to attend school at least 140 days per year and, up until 1906, their parents paid threepence a week per child. That’s when education became free in NSW, as long as you went to a public school.

Lottie’s parents and neighbours were obviously keen for their children to attend school, so the Powells, along with the Battens, Picketts, Ropes, Clarkes, Smedes, Hitzmans, Anchaws and Papworths requested a school at Washpen Gully, Parish of Louee, in 1880. The Chief Inspector granted their request but named the school Pyangle. I suspect that name was provided by local grazier and Member of Parliament, Edward King Cox whose property “Piangula” was nearby. Pyangle doesn’t seem to have been an area before that time. The school started in a bark and slab building leased for £10pa to the Department by John Smede. It was on the other side of the road down near Lawson’s Creek, but it only served for a few years.

Let’s go inside. We pass the children’s hats hanging on pegs and enter the school room. A fire is burning in the hearth and the teacher is standing on a raised platform in front of the wall-mounted blackboard. The teacher’s table and chair is there and a single cupboard. He or she has a view out the window, probably of Elephant or Lion Mountains; or the children’s horses grazing in the paddock next door. The toilets can be seen also, one in each corner of the playground – cess-pit toilets with lavatory seats to reduce flies. The children have no such glimpses. They are seated on two-metre stools and benches and their only view is the teacher and the glowing fire. I wonder where the cane is.

The day usually began with singing (including God Save the King/Queen) and oral work. Then there might be arithmetic, geometry and history. In the afternoon it would likely be recitation, drawing, reading and current topics. They learned to recite times tables, the rivers of NSW and poetry. And they learnt to spell. Older students used pens with steel nibs dipped in ink. Punctuality was stressed as was cleanliness, discipline, orderly behaviour, respect for property, obedience, honesty, conscientiousness, and love of country and Empire.

Imperialism was strong. Lottie’s teacher, for most of her schooling, was Mrs Hickey, “a kind, sympathetic and painstaking teacher”. It was she who introduced the school and community to Empire Day, held each year on 24th May. For children of my generation it was known as Cracker Night and I don’t remember any school activities. For Pyangle children it was the highlight of the school calendar, “celebrated with great enthusiasm”. Parents and friends gathered (usually about 90 of them) and saw the school grounds decorated with an avenue of flags and a large picture of King Edward on the school porch. There followed a mini-concert of songs and recitations by the pupils and a speech by a favoured local. Mr Keegan spoke in Lottie’s first year on the “great privileges we enjoyed as Britishers and members of the greatest Empire the world has ever known”. Two years later Edward Batten reminded them that one day they might have to defend the flag (he gave his life at Passchendaele eight years later). There followed a display in the playground, marching, dumb-bell exercises, raising of the flag and the national anthem. After a “splendid luncheon” there were sports events for young and old, with numerous prizes.

Then they had fireworks! Was there a great roaring bonfire in the paddock next door? (surely not one in school grounds). Did they bake potatoes in the embers? Were there rockets in bottles and catherine wheels on fences and jumping jacks leaping around feet? Were there children making drawings with sparklers and others getting singed from bungers? Were children screaming in delight and adults reprimanding with a grin? If not, then Lottie didn’t have as good a time as I did on cracker night. 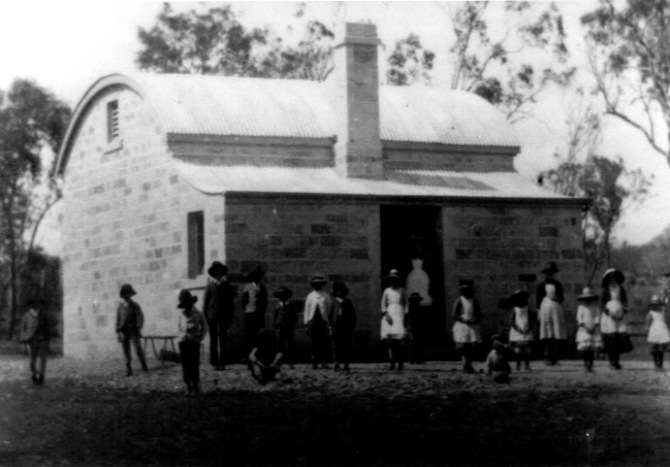 The featured image is of students of Pyangle Public School outside their Beehive school.
Image from Jill Wilson.

Miss Ellen Nevell, 1881-1883 “intelligent and respectable…reading fair, writing tolerable”. She had no training but had done 6 weeks’ practice teaching at Rylstone Public School.

Walter Nevell 1884. Dismissed in November for fraud. He applied for reinstatement, with a list of supporters, but it was declined.

Miss M C Eames 1885-Oct 1886 On 21/6/1886 parents wrote a letter of complaint to the Minister of Education. Most complaints were found “groundless”. Miss Eames, according to her inspector was “painstaking and industrious” though she overused corporal punishment. She was removed to a school “equal in importance”, McDonald’s Creek.

Miss Sarah Liddle Sept 1889-1892 Miss Liddle made school gardens and took children to  the Mudgee Flower Show. She had a cabinet of geological specimens collected by the children and “inspired her students with a love of botany and geology”. She moved north after a riding accident.

Miss Lilian Glynn 1901-May 1905 She applied for and was given permission to form a District Debating Society and use the school. She received 3A classification Nov 1903.

Mrs Sarah Hickey May 1905 to July 1914 “popular and painstaking”. In 1914 she was transferred to Mudgee District School – “Sorry to lose such a kind and clever teacher”.

Samuel J Butler 1913 He provided relief when Mrs Hickey had “considerable” leave of absence in the first half of the year.

Linda Campbell Feb-July 1914 She severed connection with the Department, was “kind and efficient”

Four things about me. I like reading, writing, researching and living in the country. In particular I like living at Kandos, where we have been for more than a decade. I have deep roots in this part of the country. My mother spent her early life in Kandos. My father was born at Rylstone. My grandparents were pioneers of Kandos and Rylstone. And I was born at Lue - and went to school in Mudgee. The history of this area excites me and I would like to share it with you. My monthly blogs are posted on the 1st of each month. However I intend taking a six-month furlough from blogging to continue a project that has been sitting on the shelves for too long. Also, after 71 posts and 59 articles I feel a bit stale. I post my first blog in May 2017. There is plenty to read on this site. If you are looking for a particular person or subject use the Search function. My last post is scheduled for 1/3/2022. If you pressed "Follow" and gave your email address, the blogs will be sent to you when I return. Thank you readers for your interest, comments and support. Colleen View all posts by Kandos History

9 thoughts on “Busy Little Bees in the Beehive at Pyangle”