In July 1925 there was an article in the Mudgee Guardian with the headline ‘Was a Bare Hill – Now it’s a Garden’. Though the article was about the Kandos Cement Company, the journalist began with a reference to the late Lord Leverhulme who’d died in May and who had created a model garden-town in England called Port Sunlight, which ‘won the admiration of thousands of social reformers’.

My curiosity naturally led me to Google, to discover that this philanthropic industrialist was able to build his own town because he had already built a soap-making business empire. You might be familiar with the name Lever Brothers and brands like Sunlight Soap, Lux and Lifebuoy.

So what does an English Baron have to do with Kandos? It seems the cement company was hanging on Leverhulme’s coat-tails to promote its own workplace philosophy – in the words of the Sunday Times ‘to make the environment of the workmen [at Kandos] as healthy and beautiful as it is possible to make it’.

There were two buildings where the company showcased both their ideology and their business: the manager’s house and the company’s offices.

The manager’s house was completed in August 1919, about the same time as the Methodist Church, which manager Floyd Richards was also responsible for, and which also has an imposing position high above the town. The manager’s house was higher than the church though. It is on the crest of the hill, with a panoramic view of the cement works on one side, the town on another, and mountains and valleys spread beyond.

Built ‘on American lines’ (think Californian Bungalow), it had a sloping roof, eaves, enclosed rafters and a gable fronted dormer window. It was lighted electrically from the cement works and had a septic system installed. Described as a luxurious home, its furnishings were ‘all that could be desired’. Over the years it entertained company directors, distinguished guests, visiting industry groups, football clubs, the local gentry and favoured locals.

Floyd Richards did not show a great interest in gardening, but his successor Harold Schroder, who took his place as manager in 1923, did. Soon after he moved in, Schroder had trees planted along the Buchanan Street boundary. Then he employed a landscape gardener A E White who laid the foundations for the gardens: terraces, walks, shrubberies and rockeries, a Japanese lily pool and rock garden, an 18 feet high fountain with five tiers for plants, and a rose garden.

Harold Schroder was manager till 1945 so he had plenty of time to establish ownership of the house, which he and his wife named ‘Warburtie’. No longer in existence as far as I can tell, Warburtie was a rural locality in a copper mining area of South Australia, near the towns of Wallaroo and Moonta, where Schroder and his wife spent their early years.

It was the offices with its gardens which became the company’s biggest drawcard. The company built their first offices in September 1914 but this building had to be removed in 1924 to allow a 50% extension of the railway branch line. The replacement was an ‘impressive building of modern design’; a building which captured people’s attention. Designed by the company’s architect Stanley Jeffreys, the expected cost, when plans were drawn up, was £4,000. Among its many features, in keeping with the Californian Bungalow style, were spacious verandahs with columned piers, cypress pine tongue and groove flooring, eleven foot ceilings, enhanced lighting and ventilation, and concrete construction (a cement company could hardly use bricks). It held the clerical office, drawing office, laboratory, manager’s and deputy manager’s offices, and the chief engineer and his staff.

Landscaping began three months before the offices were completed. A gardener from Searls (a well-known garden guru firm unrelated to the present-day Searles Garden Products) was contracted to supervise the early work, which began with the planting of 200 trees and the construction of staff tennis courts. In front of the office was a large circular garden laid out with sweeping lawns dotted with ferns, palms, shrubs, specimen trees and garden seats. A rockery was at the main entrance. The tennis courts were opened in August 1924 – picture 100 invited guests watching tennis tournaments, then being served afternoon tea on the ‘capacious verandahs of the new offices’.

Schroder employed A E White c1925 and Bill Cant in 1926 to develop the gardens. With the help of up to six gardeners, Cant looked after both the works’ and manager’s gardens till his retirement in 1965. He made a name for himself, the company and the gardens. Every year, it seemed, the Mudgee Guardian enthused about blooming delphiniums, fragrant roses, glorious stock, bright Iceland poppies, magnificent gladioli, colourful zinnias or enormous dahlias, through the efforts of works gardener Bill Cant.

Over many years the works gardens, on a Saturday or Sunday afternoon, were the venue of choice by locals and visitors, for relaxing picnics and genteel sport (tennis and bowls).

The locals were not the only ones impressed by the company’s largesse. In November 1925 the Sydney Morning Herald pointed out that the successful Kandos Cement Company ‘clearly realised the value, advertising and otherwise, of impressive office buildings of modern design’.

So, two buildings, a manager and a gardener, helped promote a company by promoting its social conscience.

The featured image
The offices of Kandos Cement Company built in 1924. Photo courtesy of Kandos Museum. 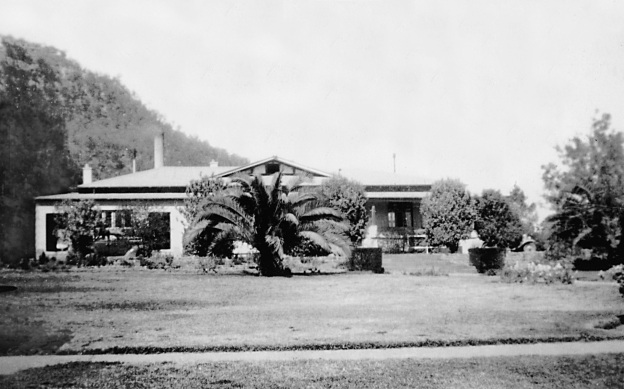 Four things about me. I like reading, writing, researching and living in the country. In particular I like living at Kandos, where we have been for more than a decade. I have deep roots in this part of the country. My mother spent her early life in Kandos. My father was born at Rylstone. My grandparents were pioneers of Kandos and Rylstone. And I was born at Lue - and went to school in Mudgee. The history of this area excites me and I would like to share it with you. Currently I am writing fortnightly blogs. If you "Follow" and give your email address the blogs will be automatically sent to you. View all posts by Kandos History

5 thoughts on “Sweet Scent of Success”