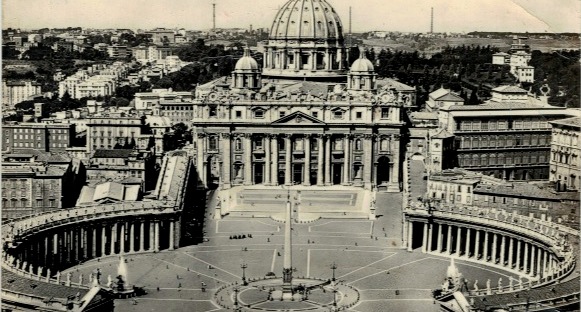 The best postcard I ever received was not addressed to me. Nor meant for me. But when I discovered it in my letter-box I was so intrigued I photocopied it before posting it in the correct slot. A warm, tender, cheeky message from wife to husband. Such is the thrill of the postcard. It can be read by any hand it falls into.

Another postcard, not meant for me, was addressed to my brother Dave, written in 2005 by an old flame. In 2019 our postie quipped in his accompanying note ‘I do not think that 14 years is a record for Australia Post but it is alarming.’

It might surprise you to know that I have collected postcards all my life, starting with the one sent by ‘my uncle the priest’ from Rome, with an image of St Peter’s – to me at boarding school in Grafton aged 13.

The oldest postcard I have is from my great-uncle Eddie Batten to his sister Clara Nash at Rylstone dated 11 March 1917. It’s a Field Service Post Card with signature and date, six printed sentences to cross out or leave, and the strict warning ‘if anything else is added the postcard will be destroyed’. Eddie’s blunt and poignant message reads:
I am quite well
I have received your parcel
Letter follows at first opportunity
I have received no letter from you.
Later that year two months after Eddie died at the front, his father received a post card from Rylstone Bank of Commerce ‘With kind thoughts and best wishes to dear Mr Batten from The Goodmans’.

Most of my four hundred and three postcards have none of the intensity of those last two. They are about travel – the great Australian pastime of the last four or five decades – leaving home, coming home and, for the recipient, staying home. They tell of exotic locations, new experiences, spectacular scenery and brilliant or disappointing weather. And the best are padded with insightful, witty observations.

I don’t wish to underrate the importance of postcards. They are the E-hugs of travel, linking the traveller with homebase, imaginatively and emotionally. We have all experienced those moments exploring post card stands in tourist shops, searching for ones which best capture our pleasure and intent. Most of us have smiled as we plucked a post card from the letterbox, read it and stuck it on the fridge.

I’ve discovered, having saved them for so many years, that they capture significant family and personal history, such as the travel experiences of my friends and rels (and my own) as well as all the places where I have lived over the last sixty years. From a larger perspective, they capture history – photographic, postal, graphic art, advertising and social history.

The first postcards were produced in Austria in 1869, simple blank cards imprinted with a stamp, one side for the address, the other for a message. At that time they were a Post Office monopoly. It wasn’t long before postal departments around the world got in on the lucrative product and the postcard craze began. On the first day of issue in the UK (1870) half a million postcards went through the London postal centre. By the turn of the century the monopoly was over and private makers were producing printed cards with the address, message and affixed stamp on one side, image on the other. An estimated one billion postcards a year fell through US letterboxes between 1905 and 1915. Like the email this century, the post card revolutionised communication. It was quick, manageable and cheap. Demand decreased however with the use of the telephone and telegram. Today, given the popularity of social media, the postcard seems an anachronism.

Or is it? I recently learnt about Postcrossing, an online project launched in 2005 by Paulo Magalhães, a Portuguese software engineer. It allows anyone in any part of the world to send and receive postcards. A popular hobby. The last time I looked, it had almost 800,000 members in 207 countries with 59 billion postcards sent. And would you believe there is now an annual world Postcard Day – October 1st. There are also serious collectors out there, joining societies, attending fairs, reading bulletins and buying, selling and collecting postcards.

So what am I going to do with my box of postcards? Well time is running out. I am cleaning up and cleaning out so I intend sending back the post cards so my friends and relatives can enjoy their memories.

Four things about me. I like reading, writing, researching and living in the country. In particular I like living at Kandos, where we have been for more than a decade. I have deep roots in this part of the country. My mother spent her early life in Kandos. My father was born at Rylstone. My grandparents were pioneers of Kandos and Rylstone. And I was born at Lue - and went to school in Mudgee. The history of this area excites me and I would like to share it with you. My monthly blogs are posted on the 1st of each month. However I intend taking a six-month furlough from blogging to continue a project that has been sitting on the shelves for too long. Also, after 71 posts and 59 articles I feel a bit stale. I post my first blog in May 2017. There is plenty to read on this site. If you are looking for a particular person or subject use the Search function. My last post is scheduled for 1/3/2022. If you pressed "Follow" and gave your email address, the blogs will be sent to you when I return. Thank you readers for your interest, comments and support. Colleen View all posts by Kandos History