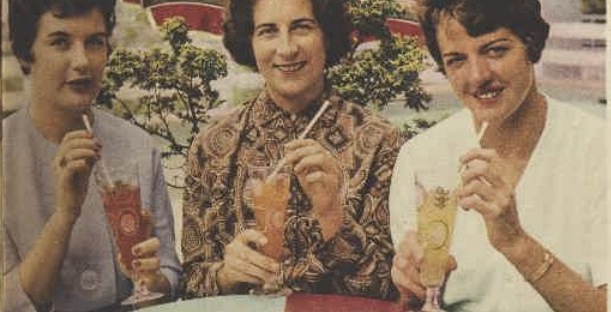 Beatrice Hayley soars above Henbury Golf Course, an icon of fame and success, a champion. Her photo is on display in the club. It shows a glowing fresh-faced young woman, looking down at her cup with the blushing pride of success. I imagine she is holding the Australian Women’s Golf Championship cup which she won on 29 July 1961, at 18, the youngest girl ever to win it.

Leonora Wray, grande dame of women golfers, herself a winner of regional, state and Australian titles, and a founding council member of the Ladies Golf Union, at that time in her seventies, wrote to Alf Moss at Henbury: “My hearty congratulations to you on her success…she was so sweet and natural and truly amazed everyone…she is…Australia’s best find so far.” Leonora was also wanting Alf’s thoughts on Beatrice’s future. “My idea” she added “is to have Mackenzie [the professional at the Australian Golf Club] take an interest in her game. He polished…many…every post must be a winner where she is concerned.”

Beatrice had begun to make her name a few years before then – Henbury champion 1958, ’59 and ’60; Western Districts Champion in ’59; and Champion of Champions in 1960. Alf Moss, well-loved Henbury golfer, was her golfing instructor and mentor. But it was probably through Leonora’s influence that six months later Beatrice was living in Sydney, working in a bank (her brother-in-law was a bank manager) and playing golf almost every day on the Australian Golf Course at Rosebery, said to be the oldest golf course in Australia.

On 7th February 1962 Beatrice shared the front cover of the Australian Women’s Weekly Teenagers’ Weekly with two other sporting heroes from the bush, tennis player Margaret Court from Albury and squash player Heather Blundell from Queanbeyan. These rising sports stars shared their experiences and aspirations. Beatrice hoped one day to play a game of golf on the world’s most famous golf course, St Andrews in Scotland. She believed that the qualities needed for success were to start young, practice often, try hard and have natural ability and good temperament.

It set me thinking about her own background, this young woman from a small industrial town. It helped I think that she was part of a large active family, born 16 November 1942, one of six children, with a hard-working father Norman at the cement works and a mother Elizabeth who encouraged her children to participate. Beatrice won the 33 yards Juvenile Championship at eight and regularly won events in school and church sports. Her mother enjoyed golf and her sister Phyllis showed “great promise on the golf links”. They all joined in community events, Beatrice winning prizes and acclamation for cake making, playing Cinderella and being “belle” of a Fancy Dress Juvenile Ball. I am not sure that she was brilliant academically but she was a stayer, earning an attendance certificate in third class. I see members of her family in Junior Red Cross, Scouts, Methodist Church and CWA. I see her siblings enlisting and her uncle receiving an Order of the British Empire.

The highpoint of Beatrice’s career was certainly the National Championship but she went on to earn other gongs including the Australian Girls Amateur Championship in 1962 and 1963, the Tasman Cup in 1964 and a hole-in-one in a par-three hole, “the highlight of today’s play”. She represented NSW and Australia in a number of events.

Just as significant to Beatrice, I am sure, was meeting and marrying, in 1964, Des Turner, also a member of the Australian Golf Club. He too, after starting as a caddie at Royal Hobart, became a champion golfer “with an array of State and Australian honours to his credit”. One enthusiastic journalist described them in 1964 as “the best husband-and-wife team in Australia”. For a time they both worked for PGF (Precision Golf Forging Company), a leading Australian golf club designer.

While Des made golf his life, getting involved in State selection, the Golf Union and golf clinics, it appears that Beatrice had retired from golf by the 1970s. It is hard to say what effect hepatitis had on her career. She was diagnosed with it in 1959, before immunisation, modern testing and various forms of the disease were identified. Eventually she and Des divorced. She re-married Ross Carter and ended up in Maryborough where they had a pineapple farm and a school bus run. She died of lung cancer in January 1992 at, to my mind, the very young age of 49. I don’t know whether she got to St Andrews.

Towns, like people, embrace their heroes. Perhaps because heroes embody our aspirations. They inspire us; make us believe we can achieve. But I wonder whether Beatrice thought of herself as a hero or champion.

Photo of Beatrice displayed at Henbury

Four things about me. I like reading, writing, researching and living in the country. In particular I like living at Kandos, where we have been for more than a decade. I have deep roots in this part of the country. My mother spent her early life in Kandos. My father was born at Rylstone. My grandparents were pioneers of Kandos and Rylstone. And I was born at Lue - and went to school in Mudgee. The history of this area excites me and I would like to share it with you. Currently I am writing monthly blogs posted on the 1st of each month. If you "Follow" and give your email address the blogs will be automatically sent to you. View all posts by Kandos History