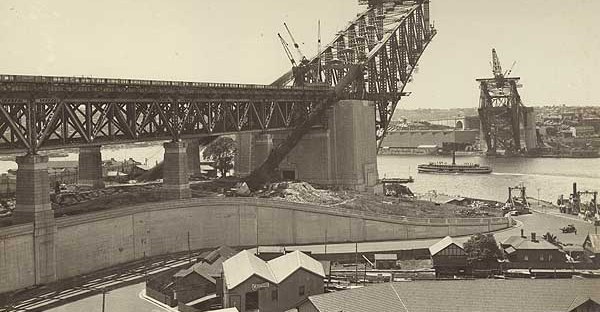 We always thought Kandos produced the cement for Sydney Harbour Bridge: our town helped build the gigantic Coathanger, at that time the largest one span arch bridge and widest bridge in the world. It was cause for great community pride. But was it just an urban myth?

My attention was piqued by a sentence in a Wikipedia article titled Sydney Harbour Bridge. It stated “The concrete used was…supplied from Davenport Tasmania and shipped to Sydney on a ship named Goliath.”  The source? “Goliath Cement” The Companion to Tasmanian History, University of Tasmania.

Now we all know not to blindly accept Wikipedia but that citation seemed pretty impressive. Moreover, it led to a webpage copyrighted to the Centre for Tasmanian Historical Studies, which gave a short history of Goliath Cement in Railton Tasmania, “contracted to supply cement for the Sydney Harbour Bridge contract”. I felt as if my bag had been snatched. But perhaps I didn’t own the bag in the first place.

First I revisited the bridge. I admit I don’t have the eyes of an engineer but I needed to understand where cement was used and how much. I discovered that while the steel arch has most visual impact (and no doubt does a lot more besides), it is cement that props up the arch and frames it. Cement provides the thoroughfare and approaches of the bridge (given, at the time of opening, as 4.4kms). Cement built the abutments on which the arch was positioned. Cement built the pylons above the abutments, to add aesthetic value, after which those structures were faced with granite from Moruya.

At the time of the bridge opening (19 March 1932) a Kandos Cement Company advertisement in Sydney newspapers alerted readers to the strength and permanence of both the new bridge and the cement that built it. “Built exclusively with Kandos cement…exceptionally high standard of quality…34,330 tons (618,000 bags) of Kandos cement were used…” A dramatic image has steel cranes hung above the southern arch to highlight strength and permanence.

An official media release around the same time explained how the cement was ordered by chief engineer Dr John Bradfield and had to be at least 8000 pounds per square inch compressive strength for the arch supports; and at least 7000 pounds psi for ordinary purposes. And how Kandos Cement Company had installed a pneumatic mixing and blending plant, the first of its type in the world, to achieve that high standard.

So you’d say: where’s the argument? Wiki got it wrong.

Then I found another discomforting reference. On 26/7/1928 The Examiner (Launceston) reported that “the product of the [Goliath] works is being used in the construction of the Sydney Harbour Bridge”.

Goliath couldn’t be ignored. I trawled through Trove and the State Library and hauled out a surprising catch. In 1926 Tasmanian Cement Company began manufacturing cement in Railton, a small town outside Davenport. In 1928 Goliath Portland Cement Company took over Tasmanian Cement. It turns out that both companies at that time were owned by Dorman, Long and Co Ltd, and, peculiarly, Dorman was the English engineering company contracted to build Sydney Harbour Bridge. Moreover, the constructional engineer for Sydney Harbour Bridge, Lawrence Ennis OBE, was also managing director of Goliath Cement. Surely the only object in investing in a cement company was to make a profit selling cement for the project you were working on.

But why no mention of it?  Goliath company produced two books in the 1970s “Fiftieth Anniversary” and “The Goliath Works”, both self-promotional publications, but they make no claim on Sydney Harbour Bridge.

I chased up the researcher at the University of Tasmania, connected to that Wiki article. She will get back to me when she has a chance to look through her files.

In the meantime, I can only assume that the company was sensitive to conflict of interest and that Dorman Long and Lawrence Ennis preferred to hide rather than reveal their contribution of Goliath cement (whether large or small) to the building of Sydney Harbour Bridge. I have little doubt that some Tasmanian cement found its way onto the bridge and I look forward to finding out how much.

That sentence in Wikipedia needs to change though. It makes no mention of the significant contribution of Kandos cement to Sydney Harbour Bridge. Also the “Goliath” ship reference is faulty. A cement-carrying-vessel “Goliath” was launched in the 1990s, not the 1930s. So, is there anyone out there with advice on changing Wiki?

Finally, my thanks to Pat Amos who suggested this blog topic and set me on this research trail. I will attach any further info on my next blog.

For another article on the topic of cement, click here for the downloadable Mudgee Guardian article “Mending Fences”.

Four things about me. I like reading, writing, researching and living in the country. In particular I like living at Kandos, where we have been for more than a decade. I have deep roots in this part of the country. My mother spent her early life in Kandos. My father was born at Rylstone. My grandparents were pioneers of Kandos and Rylstone. And I was born at Lue - and went to school in Mudgee. The history of this area excites me and I would like to share it with you. My monthly blogs are posted on the 1st of each month. However I intend taking a six-month furlough from blogging to continue a project that has been sitting on the shelves for too long. Also, after 71 posts and 59 articles I feel a bit stale. I posted my first blog in May 2017. There is plenty to read on this site. If you are looking for a particular person or subject use the Search function. My last post is scheduled for 1/3/2022. If you pressed "Follow" and gave your email address, the blogs will be sent to you when I return. Thank you readers for your interest, comments and support. Colleen View all posts by Kandos History